Victoria’s first vineyard was planted at Yering Station in 1838 in the Yarra Valley. 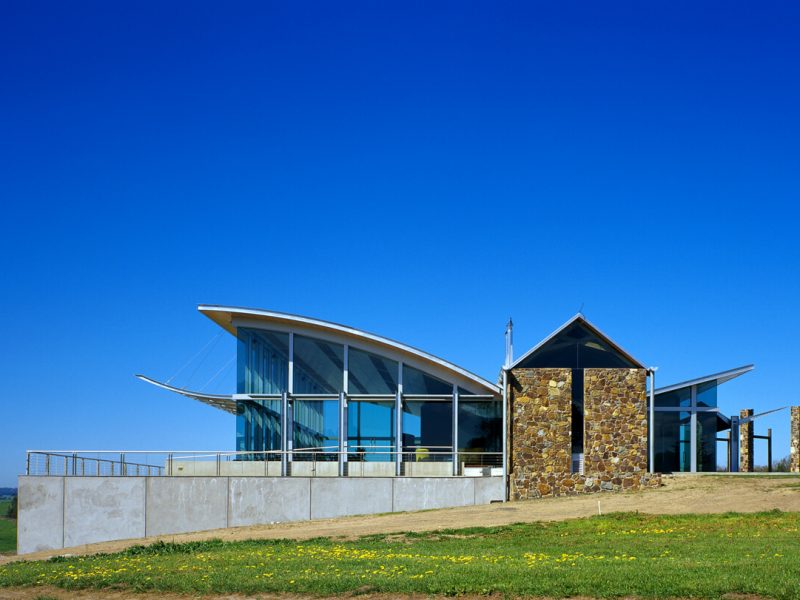 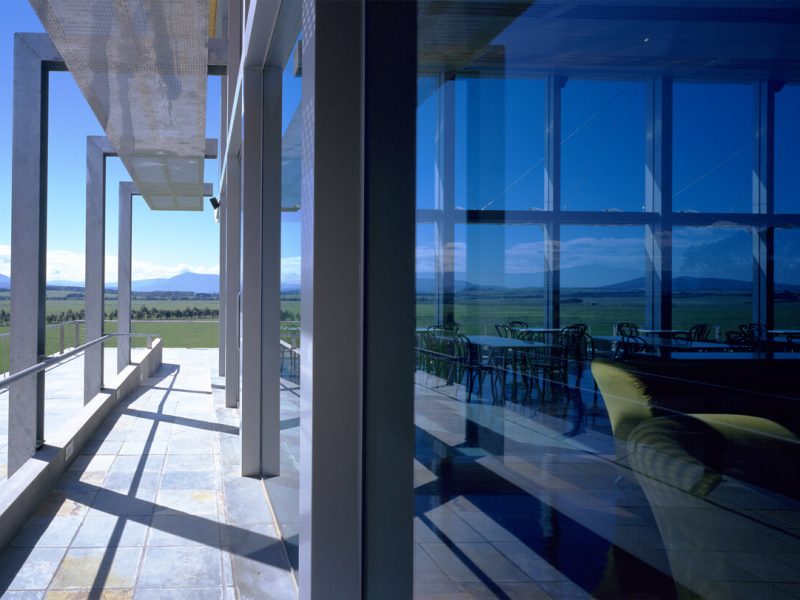 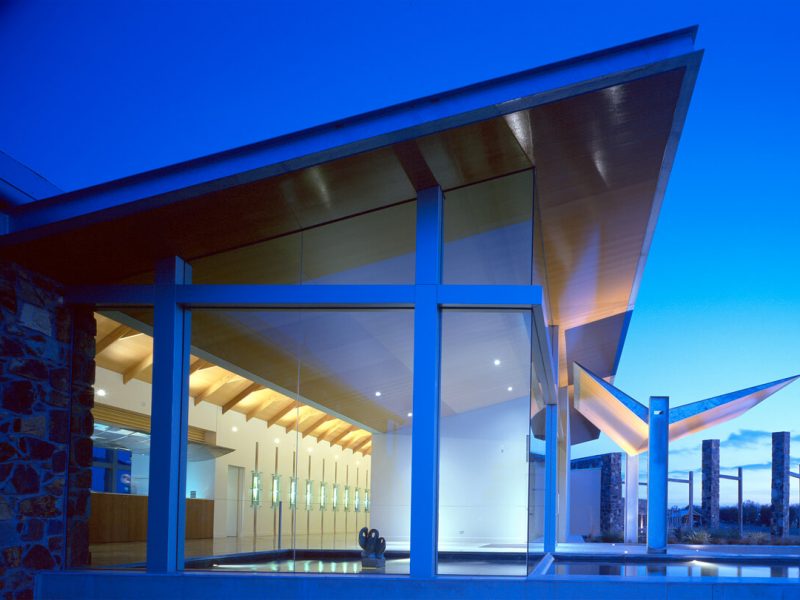 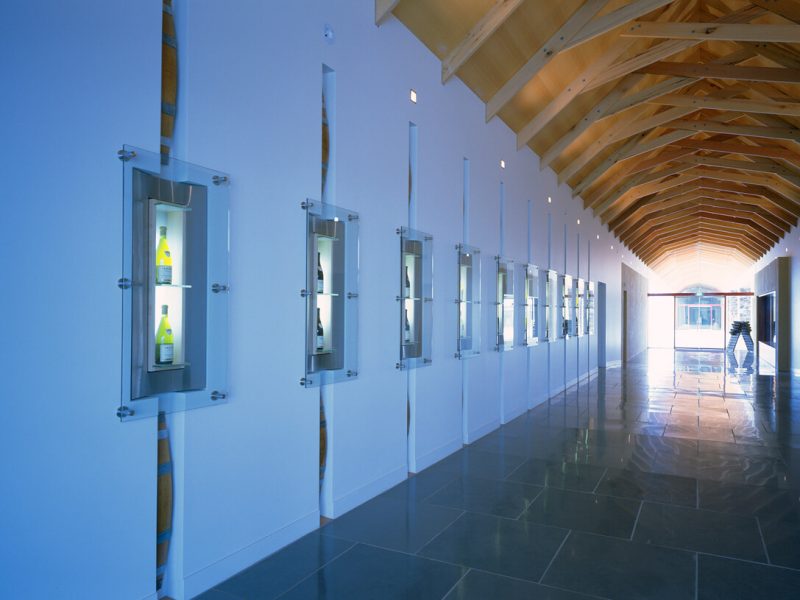 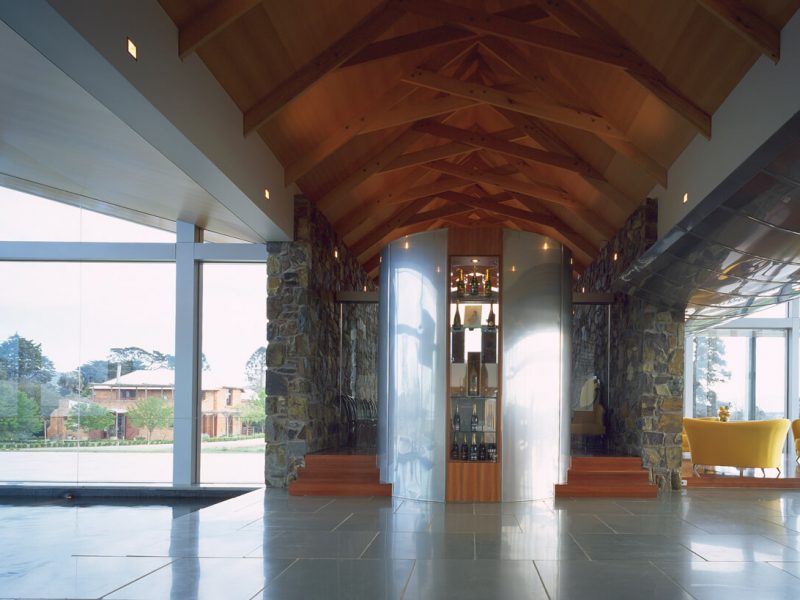 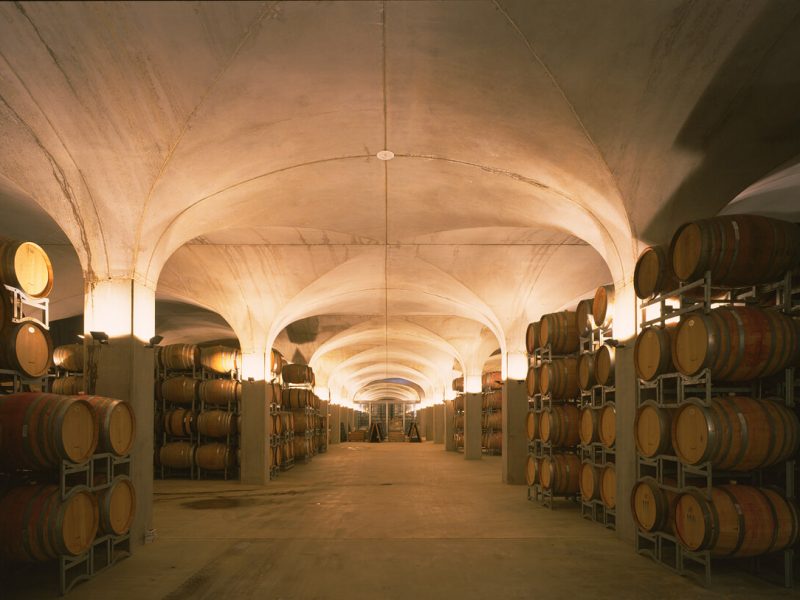 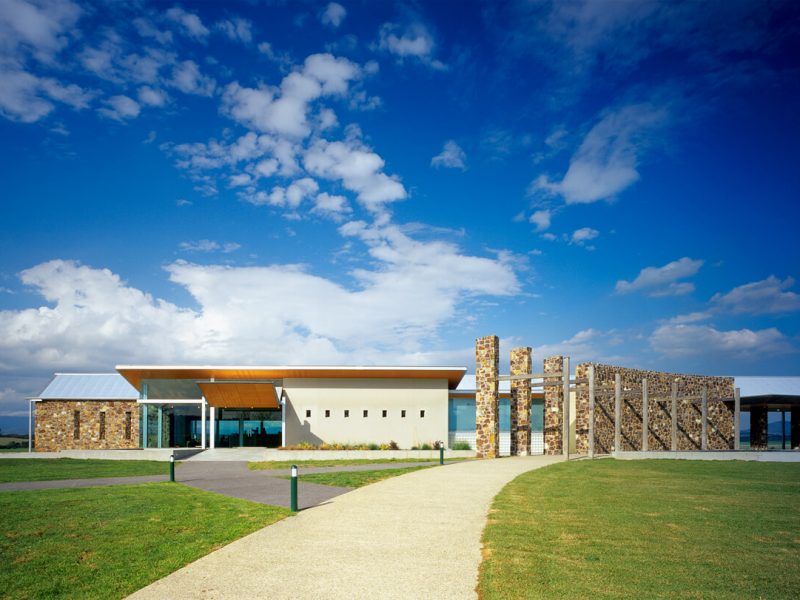 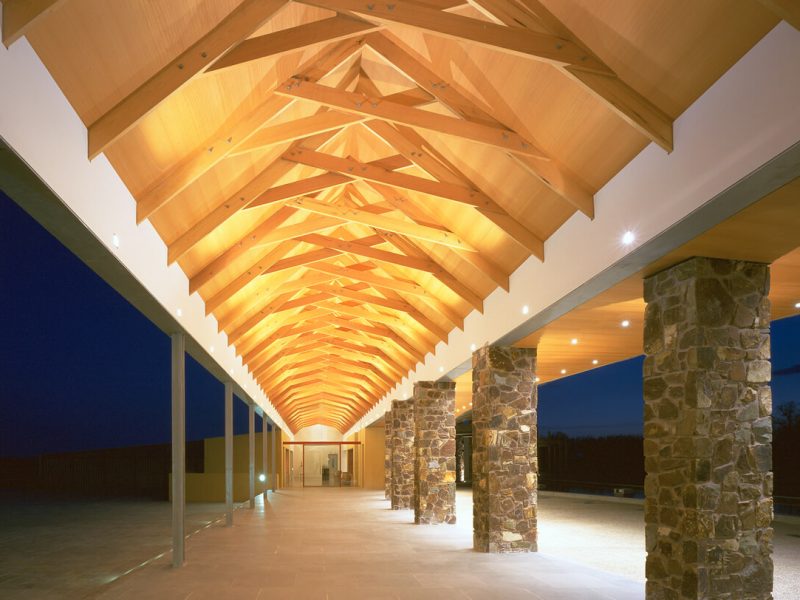 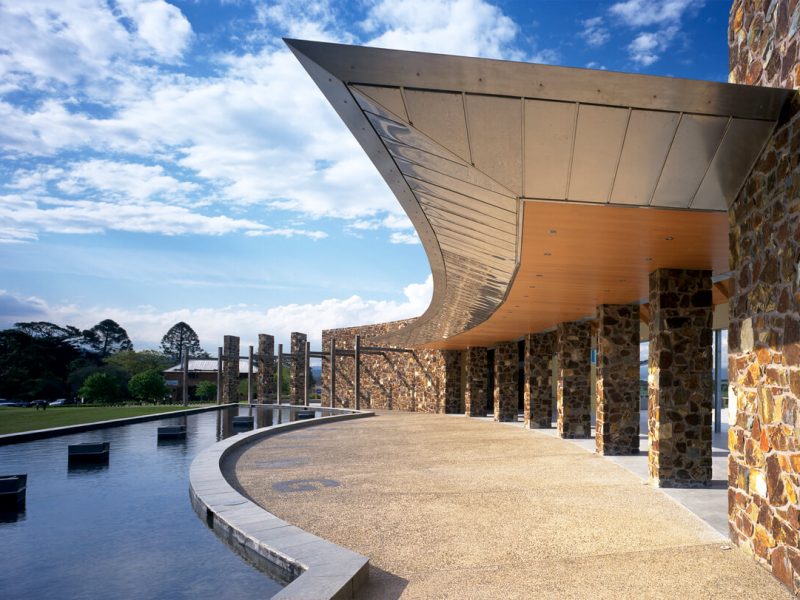 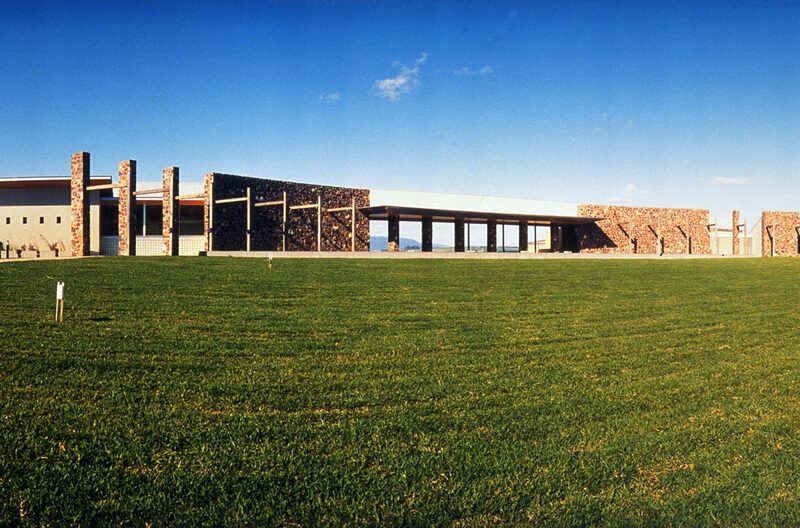 Remnants of the history are the wine cellar door building, the Historical Barn and the striking row of Elm trees. Searching for contextual references, the eye was drawn to the railway trestle bridges that bisect the dramatic expanse of flat pastoral grazing land, elevated on mounds of earth to clear periodic flooding. These bridges create a frame to view the fields beyond, a form that was later interpreted in the design of the winery.

The new winery is positioned on a sloping embankment to the east of the Historical Barn taking full advantage of the magnificent view of the valley and distant mountains. To minimise the building presence, the embankment was excavated to house the production facilities in a structural system of vaulted concrete shells, ideal for maintaining constant cellaring temperature and supporting the random flowing plan of the upper floor.

At the upper ground level, visitors to the complex are greeted by a curving 6m high stone wall sourced from the local quarry. The meandering wall binds the administration and public areas and fragments at either end into a series of isolated stone columns that continue it’s presence infinitely into space. The radius of this curved wall centres on the Historical Barn, with the central punctuated section framing the view of the landscape in a mannerism appropiating the railway trestle bridges. The radius of the wall continues to form a circular pedestrian path that encircles the Barn, linking the winery to the carpark, and cements the visual axis from the Barn through the stone wall to the mountain range beyond. A gently sweeping mound of earth embraces the wine precinct, screening the carpark.

Located behind the stone wall, a central circulation spine, characterised by a scissor timber truss structure, forms the self guided tour for visitors with views into every aspect of wine production. In plan form, the upper floor is dominated by the play of the curved stone wall against this central spine. As the stone wall gently nudges the central spine, it creates the punctuated openings that frame the view beyond. In elevation form, the stone wall acts to dematerialise the building so highlighting the natural environment. The central spine is the architectural imposition, acting as the metaphorical bridge that links production to consumption.

Materials and forms chosen for the new complex are also to be found in the existing structures, thus establishing a silent dialogue between the key buildings of this wine precinct. Traditional materials such as stone and wood are combined with metals including aluminium, stainless and galvanised steel fused with glass, also reflect materials used in the wine making process. The combination of old and new materials and forms symbolises the combination of old and new wine making techniques. As well as meeting the functional requirements of a winery, the building form with it’s timeless stone wall seeks to merge into the landscape to frame, highlight and embrace the natural beauty of the Yarra Valley.

2015: 15 Architectural Masterpieces of the Wine World

“This complex of buildings, together with its connective landscape, forms an iconic, yet highly appropriate facility for a commercial wine making tourist destination.
The jury was impressed by the holistic design approach adapted by the architect. The complex, which comprises the original historic cellar, a renovated barn which now acts as a reception hall, and the main building which incorporates a restaurant, function rooms, production area, offices and cellars, has been very sensitively sited and woven together in the landscape. An extremely satisfying immediate environment has been created to facilitate a journey of discovery for visitors within a functional high quality working environment. The production areas, and the heroic concrete vaulted cellars have been housed under the building to minimise their visual impact and to capture thermal advantage.
The central parti of this complex successfully draws inspiration from the historic trestle bridges of the area, which bisect the flat pastoral land whilst dramatically encapsulating rural views.
In the same manner, a sinuous field stone spine wall, which is the arrival statement of the complex, breaks to frame a grand view of the Yarra Valley, whilst gathering the various activities and providing a clear pedestrian spine.
The materiality of the complex has been garnered, and skillfully blended from those materials found in local structures and the equipment used in the wine making process.
The project receives a commendation for its high level of design sophistication, sensitivity to the rural environment, incorporation of ESD fundamentals and its contribution to rural Victorian tourist industry.”